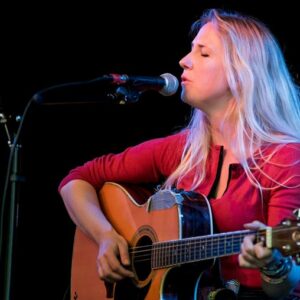 A fairy-lit, early winter’s eve of the richly evocative voice and music of Sarah Larkham as she performs songs from her new EP among others – with support from beautifully ethereal folk singer-songwriter Sue Harding.

Once described by Leslie Crowther as ‘a young Stevie Nicks’, Sarah started performing at a young age, and as a teenager was invited on stage to sing El Condor Pasa with Julie Felix when the star heard her voice in the crowd. Sarah’s songs are lyrical, powerfully narrative and will ‘stay in your head for days’ (Folkwords magazine)

Expect one or two ‘surprise’ cover versions, expect to laugh as well as weep, expect to return home feeling as if you’ve just spent the evening in the company of a very good friend.