Pedal Mania is a project led by organist John-Paul Gard. JP is based in Bristol but is another of our 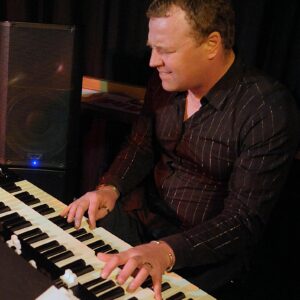 players with a national reputation who spends a lot of his time working out of the city. JP started playing organ at a young age, and is one of the few exponents to have mastered the foot pedals rather than just playing bass lines with the left hand – his amazing coordination is quite something to see and hear. As well as playing in many instrumental line-ups JP also works with acclaimed vocalist Becki Biggins and has performed on over 40 CDs with various artists. JP also appeared at this year’s Brecon Jazz Festival, and we’re very pleased to welcome him to the club for the first time since we moved to the Hen and Chicken.

Guitarist Dan Waldman is well known both in Bristol and London, where he has presented his own band at Ronnie Scott’s. He spent several years living in New York and has returned to the USA several times. In 2020 he released Sources and Angles, his debut recording as leader, recorded in Brooklyn and featuring international saxophone star [and former Bristol University student] Will Vinson.  Dan last performed at the club for our 2021 Christmas Special alongside Jake McMurchie.

Drummer Toby Perrett has been working with JP for many years, and also promotes the jazz gigs at the Old Fish Market. In 2019 he toured with Andy Hague’s Quintet to promote Andy’s Coming of Age CD.

You can preview some of JP’s music on Bandcamp, through his own website and here’s a whole live-streamed gig from the Bell in Bath