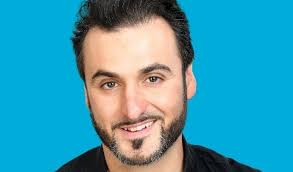 Featuring
ELLIOT STEEL plus compere ROSS SMITH
“A force of nature. Stand well back as Monahan let’s rip” London Evening Standard
Everybody’s favourite comedian, lovable Patrick Monahan blends a high energy comedy style with hilarious and engaging topical and observational material.  Known for working a room, Patrick is adored by all audiences with whom he makes an effortless connection!

Patrick is a comedian with an established career that blends TV appearances with solo stand up Tours alongside Festivals and circuit sets. Constantly touring, last year he played over 300 gigs throughout the UK and Europe, had another successful run at the Edinburgh Fringe and appeared in far-flung hotspots including Dubai, Bahrain and Costa Rica.