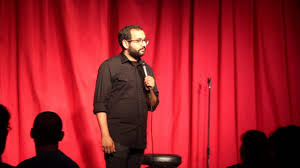 Featuring
LAURA LEXX plus compere ROBIN MORGAN
“Omid is an absolute beast on stage… always bringing fire in his deliberate delivery.” Comedy Central
Born to an Iranian mother and Indian father, Omid Singh is one of the top multicultural comics working today. Not that he considers himself a public symbol or boundary-breaker. As he puts it onstage, “I don’t do anything scary when I go to the airport…but I do like to see how far I can walk away from my luggage.”