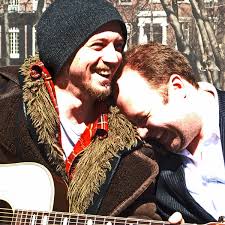 Musical satirists Jonny & the Baptists – real names Jonny Donahoe & Paddy Gervers –  are among the hottest musical comedy acts on the UK scene, regularly appearing on TV, radio, at festivals and most recently a 50-date UK tour of their hit show “Eat The Poor”. From silly songs to satirical anthems, their riotous live blend of comedy and rock gig has won adoring fans across the country.

We live in a divided world, and we want to cross that divide. But how can we be popular now ‘populist’ means ‘I’m a shit’? Answer: WE LOVE EVERYONE. Oh, except bastards. Everyone hates bastards, right? We agree.

Multi-award nominated* musical-activist-comedians, Jonny & The Baptists, are sick of being political and divisive. This show is about how everything is definitely fine. Let’s just get along!