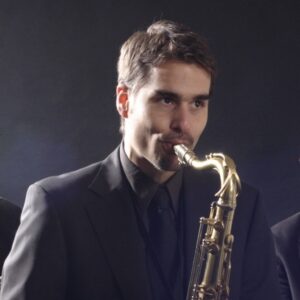 Martin Kern grew up in Bülach near Zürich in Switzerland and first started to play classical cello. Later at the age of 17 picked up the saxophone. He studied in Paris at the Cèntre d´’Information Musicale and at the Swiss Jazz School in Bern before spending some time in New York. He then moved to Berlin where he became a part of the vibrant jazz scene. It was there that he recorded his first albums as a bandleader, “Visions” and “Now Is The Music”. He later moved to Vienna where he recorded his most recent CD “Live At The ORF”, a live radio concert at the Austrian Broadcasting Corporation. The original compositions on this album also borrow ideas from world music and blues. Martin’s music is a striking blend of bebop, hard bop and contemporary jazz, his sound reflecting those of legendary saxophonists Sonny Rollins, Dexter Gordon and others. He has been living here for a couple of years to complete an MA in Film & TV Composition at the University of Bristol.

Trumpeter Andy Hague recorded his first quartet CD “Double Standards – Release” during lockdown, just after the band’s performance at the Hen & Chicken. The new CD will of course be available tonight…..

Pianist Jim Blomfield is renowned as one of the mainstays of Bristol’s jazz scene. He has backed countless big-name guest soloists and released two albums of his own music which blend jazz with electronica and contemporary music influences. He is also well known as one of the UK’s finest salsa pianists and appears in many Latin ensembles.

Drummer Mark Whitlam is one of the busiest musicians in Bristol – he is a senior lecturer for BIMM music college, has performed with Andy Sheppard’s Hotel Bristol, co-leads and composes for jazz/neo-soul band We Are Leif, and before lockdown was playing increasingly frequently with Iain Ballamy.

The band will be playing hard-driving modern jazz in the Blue Note vein, and maybe a few originals.

Food is served in the main bar from 5 pm. If you would like to dine with us before the gig, please book a table here: Contact – Hen & Chicken (henandchicken.com)