The controversy surrounding the murders at 10 Rillington Place has raged for years. Books and films have portrayed the events as a landmark case in the abolition of the death penalty – and rightly so. But, what exactly went on behind the doors of this famous address? Was Reg Christie responsible for everything? Or could it be that Timothy Evans played a part? Could any of the deaths have been avoided? Where did it all go wrong?

In a talk which will be accompanied by photographs rarely seen, this presentation will grab the audience – and may even shock them. How was it possible that so many women lost their lives without a hint of suspicion? 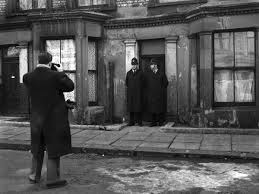 Paul Stickler is a crime historian and criminologist with 30 years police experience including a secondment to the FBI Academy in Quantico, Virginia and researches British murder investigations in the early to mid twentieth century. His book, ‘The Murder that Defeated Whitechapel’s Sherlock Holmes: At Mrs Ridgley’s Corner’ is an examination of a Hertfordshire murder in 1919 in the context of the law and police procedures at the time. Other research has led to the recent BBC programme, The Porthole Mystery, a murder in 1947 committed on the high seas.