Our special guest soloist tonight is Simon Spillett, who over the past twenty years or so has 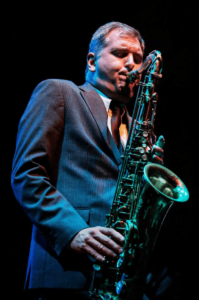 established himself as one of the UK’s pre-eminent saxophonists. Simon is a firm advocate of straight-ahead hard-swinging modern jazz, and his lack of pretention has made him a huge hit with the UK jazz audience, although he sometimes jokes online about his lack of eligibility for Arts Council grants.

Alongside his playing career Simon is also a jazz author and reviewer, perhaps best known for his biography of Tubby Hayes, “The Long Shadow of the Little Giant.”  Both through his writing and his playing he has done a huge amount to bring the achievements of one of the UK’s most important jazz musicians to a whole new generation. Although able to sound uncannily like Tubby when he chooses to, Simon’s palette is broader than just one player and he is also highly knowledgeable about the styles of other saxophonists such as Zoot Sims, Stan Getz, Dexter Gordon and John Coltrane.

His latest project is the Simon Spillett Big Band, featuring the cream of the UK jazz scene and dedicated to performing the arrangements of Tubby Hayes, many of which have not been heard performed live since Tubby passed away in 1973. Watch out for them at Ronnie Scott’s and festivals across the country this summer.