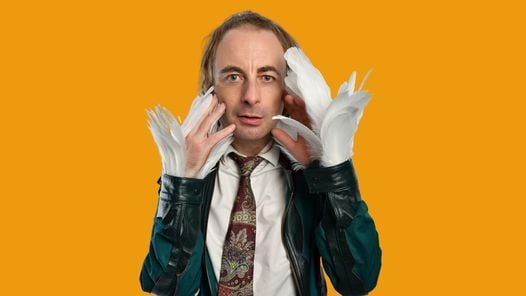 “Like a rare exotic bird, he’s special” The Daily Express

Paul Foot has made numerous television and radio appearances, the most recent of which include 8 Out of 10 Cats Does Countdown on Channel 4, ABC Australia’s Melbourne Gala, Breaking The News BBC Radio Scotland and Dave News for Dave at the 2019 Edinburgh Fringe.

In 2019 he also made a triumphant debut at Glastonbury and played the comedy tents of many of the most prestigious summer festivals.  Excerpts of his many much-loved appearances on Never Mind The Buzzcocks have garnered over a million views on YouTube. Paul has been nominated twice for the Barry Award at The Melbourne Comedy Festival and has been voted Best of The Fest International and Best International Act at the Sydney and Perth Comedy Festivals respectively.

“An exquisite symphony of jubilant madness” The Melbourne Age