The Be-Bop Club presents an evening with The Kevin Figes Quartet. 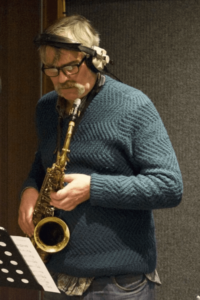 armoury. A mainstay of the Bristol scene for many years now, Kevin is one of the city’s most prolific composers and has arranged music for various sized ensembles as well as running his own label, Pig Records. His most recent CD Changing Times was released during the lockdown and reflects his interests in UK jazz of the late 60s and early 70s from artists such as Mike Osborne and Soft Machine. Changing Times received a 4-star review from Dave Gelly in The Guardian

Joining Kevin is long-term collaborator Jim Blomfield, another central figure in Bristol’s jazz scene, South Wales’ bass virtuoso Ashley John Long and another newish addition to Bristol’s scene in drummer Jon Clarke. Jon plays in all sorts of musical settings but is possibly best known for his work with Latin groups in which he plays regularly alongside Jim and Cuban trumpeter Michel Padron.

You can listen to [and purchase!] all Kevin’s music on Bandcamp.