It was only a matter of time before Cuban born trumpeter and trombonist Michel Padrón crossed paths with ‘gringo’ Jim Blomfield, one of the South West’s best-known Jazz and Latin pianists. Two brilliant exponents of the Afro-Cuban and Salsa genres, the pair bring together some of their favourite musicians to play a dynamic set of sparkling Latin Jazz originals and covers. 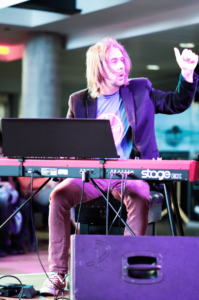 Michel Padrón who has been resident in the UK since 1998, has toured extensively in Europe and the USA. He is the leader and musical director of Asere, a Latin band with a career spanning over two decades and one that has included collaborations with such musical legends as Billy Cobham, Cesaria Evora and Toto la Momposina.

Jim Blomfield has often been the pianist of choice to accompany some of the UK’s biggest jazz names, performing at numerous venues and festivals throughout the country. An accomplished composer, arranger and bandleader, his latest album is ‘Strange Beauty (Every Way Ok)’ recorded at legendary Real World Studios and released on Pig Records.

The band is completed by the exciting and dynamic rhythm team of Jon Clark drums, Jason Gaines congas, and Roshan ‘Tosh’ Wijetunge on bass.