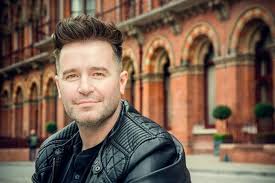 Stand Up For The Weekend with JARLATH REGAN featuring CHRIS BETTS