Saxophonist Jake McMurchie is one of Bristol’s most successful players, having performed across 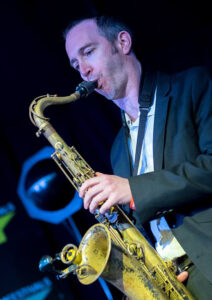 Europe as a member of Get The Blessing. A versatile musician with wide-ranging musical interests, Jake describes himself as “an improvisor who primarily works within the jazz world. I love classic jazz and standards as much as free improv and have an interest in ambient music and using effects pedals and electronics as adjuncts to the saxophone.” His main outlet for the electronics side is one of his other projects Michelson Morley.

“If there were a prize for forming bands with instantly distinctive sounds, Bristol-based saxophonist Jake McMurchie would surely carry it off. As a key driving force behind the award-winning quartet Get The Blessing, McMurchie has moved from bass-groove to live-wire industrial loopy without dropping a beat.” – London Jazz News.

Pianist Dan Moore last appeared at the club with Denny Ilett’s band, and has toured internationally with artists including Percy Sledge, Pee Wee Ellis, Fred Wesley, Tony Allen and Nostalgia 77, and is well known to Bristol’s jazz audience through his work with The Pushy Doctors, alongside Andy Sheppard and Tony Orrell. Also a producer and songwriter, Dan has worked with Joss Stone, Tom Jones, Roni Size, and Rumer, and has co-written a chart single for Will Young.