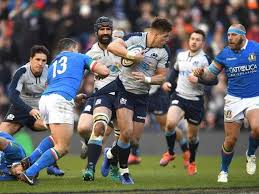 Italy will welcome Scotland to the Stadio Olimpico in Rome on Saturday 22nd February, during the third round of the 2020 Six Nations Championship.

A Blair Kinghorn hat-trick helped secure a 33-20 victory for Scotland over the Azzurri during the 2019 Championship.

Italy and Scotland have contested 30 rugby test matches since their first meeting in 1996. Scotland have won 22 of those matches, whilst Italy have won eight matches.