The Trio formed in 2016 to explore the classic organ trio line-up popularised by Jimmy Smith of Hammond organ, guitar and drums. It was immediately apparent that the players generated a special chemistry. They have gone on to become one of the hardest grooving bands on the Bristol scene, playing tunes by the likes of John Scofield, Larry Goldings and Pat Metheny and their own originals. For this special event, they are joined by outstanding trumpeter Gary Alesbrook. 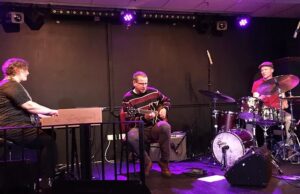 Matt’s inventive and melodic guitar playing has been featured in groups as stylistically diverse as Andy Sheppard’s Hotel Bristol and Emily Wright & The Royals. He also takes the lead role in the “Music of Pat Metheny” project alongside pianist Dave Newton. Matt is also known as an instructor and educator, specialising in jazz improvisation.

Scott is probably best known for playing rock music with Ian Anderson/Jethro Tull all over the globe since 2010 but he’s not just a rocker. Jazz, especially in the organ trio setting, has always been close to Scott’s heart and this trio shows a more subtle side to his playing. In the jazz world, Scott has worked with Alan Barnes, Tina May, Herb Geller, Bobby Wellins, Jason Rebello, Pee Wee Ellis and many others.

Ruth has many strings to her bow as she is equally adept on organ, piano, saxophones, accordion and vocals. After graduating from Leeds College of Music in 1998, she became Runner Up in the Young Jazz Musician of the Year (on tenor saxophone). She has released a solo album “All The Good Things” which features her singing her own songs.

Gary studied jazz trumpet at Leeds College of Music. His debut jazz album, “Jazz In Movies,” was released in 2018 and his second album “The Stories We Tell Ourselves” was released in 2019. Alesbrook started his session career in 1999 with the Super Furry Animals, touring and playing on the albums ‘Mwng, Rings Around the World, Hey Venus! and Phantom Power. He also played on Gruff Rhys solo album, Hotel Shampoo. Alesbrook recorded with Kasabian in 2006 playing “The Doberman” on their second album “Empire.” He toured next with the Scissor Sisters on their UK dates and for their live DVD recorded July 2007 at London O2 arena. He then joined Kasabian for recording and touring from 2007 until the present day, recording on Empire, West Ryder Pauper Lunatic Asylum, Velociraptor! 48:13 and most recently For Crying Out Loud. In between Kasabian commitments Alesbrook also toured and performed with US RnB artist Raphael Saadiq, Kelis, Rag ‘N’ Bone Man, Nadine Coyle and recorded on albums KT Tunstall, Tiger Suit and Noel Gallagher’s High Flying Birds. 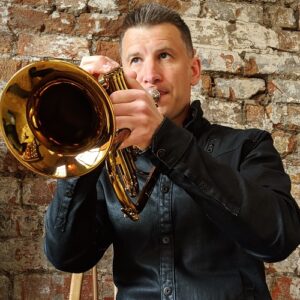 Food is served in the main bar area from 5 pm. If you would like to dine with us before the gig, please book a table here: Contact – Hen & Chicken (henandchicken.com)