Guitarist Denny Ilett is of course well-known as the organiser of Bristol Jazz & Blues Festival and is one of the few musicians around able to play convincingly in almost any style. He can be found performing in groups ranging from Gypsy Jazz through to Frank Sinatra and Led Zeppelin tributes. And along the way has worked extensively with New Orleans vocalist Lillian Boutté and king of funk Pee Wee Ellis. He recently led his fantastic Electric Lady Big Band in a live-streamed concert from Ronnie Scott’s, and the band has subsequently been in the studio recording their second album of Denny’s big band interpretations of the music of Jimi Hendrix. 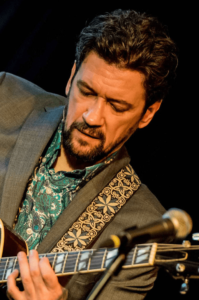 Pianist Dan Moore has toured internationally with artists including Percy Sledge, Pee Wee Ellis, Fred Wesley, Tony Allen and Nostalgia 77, and is well known to Bristol’s jazz audience through his work with The Pushy Doctors, alongside Andy Sheppard and Tony Orrell. Also a producer and songwriter, Dan has worked with Joss Stone, Tom Jones, Roni Size, and Rumer, and has co-written a chart single for Will Young.

Bassist Will Harris somehow manages to juggle the twin careers of being one of Bristol’s finest bassists and also a medical doctor working shifts at the BRI. Having completed a Masters at the Royal Academy some years ago, Will divides his musical appearances between Bristol and London, where he works with saxophonist Matt Anderson and also the Simon Gardner Big Band, alongside the cream of London’s session scene.

Drummer Ian Matthews is a bonafide rock star, having been a member of Kasabian for many years playing at major festivals and stadiums around the world. Despite his huge success in rock music, his roots were in playing jazz, for which he has a great feel and a surprising lightness of touch if you’ve ever seen him giving it one on TV.

The band will be playing straight-ahead swinging jazz combined with a few eclectic groove numbers.

The main bar serves food from 5 pm. If you would like to reserve a table to dine with us before the show, please book here: Contact – Hen & Chicken (henandchicken.com)