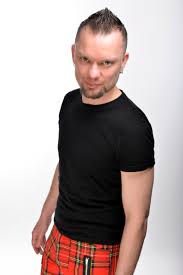 Stand Up For The Weekend with SULLY O’SULLIVAN & CO

“A crucial mix of cynicism, intelligence and menace with some killer punchlines thrown in” Music-News.com
Sully O’Sullivan is a seasoned international headliner who has performed all over the world. Renowned as an act capable of performing in any room and to any audience, Sully has also built up a reputation as one of the most dynamic and daring performers on the circuit. Possessing an abrasive antipodean delivery, he is not afraid to confront subjects many other comics would shy away from, and probably for good reason. Sully will explore areas relentlessly locating the laugh but not without a huge dose of intelligence to soften the occasional sledgehammer blow.
First stepping onto the stage in his native New Zealand, Sully rocketed to stardom making his TV debut just 7 months later in New Zealand’s cult stand-up series Pulp Comedy on TV2, where he went on to appear in another three seasons.
In 2005 Sully decided to spread his comedy wings and head to the sunny coasts of Great Britain. Over a decade later and he’s now performed in almost every corner of the country.