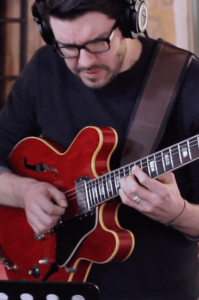 quintet featuring musicians from the forefront of UK jazz.

In 2021, Steve will be releasing ‘Emboldened’, an Arts Council England supported suite of his original music alongside recording an album of compositions with the quintet. Steve’s captivating style, lyricism and versatility has also featured on recent recordings and performances across the UK with Sara Colman, Greg Cordez and We Are Leif.

Rebecca Nash – piano Highly respected and in-demand UK pianist and composer. Rebecca’s recent album ‘Peaceful King’ on Whirlwind records was received with enthusiastic acclaim in both UK and US. “One of the freshest most creative talents in the UK at this present time” UK Vibe