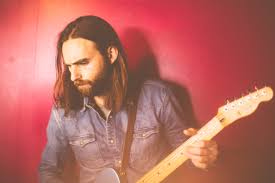 With rich soulful vocals, well-crafted songs, roots country and blue-eyed soul Sam Lewis is connecting the dots. Whether crossing genres or state lines, he has pieced together a story people need to hear.

His debut album ‘Waiting On You’ received a top review from Mojo and featured in the Telegraph’s list of top country albums from 2015. His second record Loversity, released in May 2018, widens the approach of it’s predecessor. His classic style has matured into a more refined world view, creating a soul-filled, catchy collection of reminders that diversity and unity can co-exist.

Sam has collaborated with everyone from Leon Russell to The Wood Brothers. Chris Stapleton dubbed him “a modern Townes Van Zandt.” While he’s often labelled with some form of the word ‘soulful’ his style meets at a juncture of many different genres. There’s something about Sam Lewis that is indescribably different.

“He sounds from another time, or timeless. Either way, good.” **** Sylvie Simmons, Mojo Magazine

“There’s so much soul pouring out of this guy’s pores you could bathe in it. It’s like hearing Al Green for the first time.” – Grant Britt, No Depression