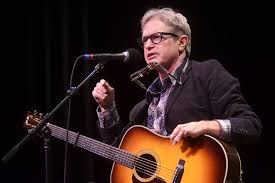 Texan Sam Baker came to prominence with the release of Mercy, his groundbreaking reflection on sorrow, hope, redemption and above all else a joyous love of life. The record signified the arrival of a major songwriting talent, and since then Sam has continued to release a string of brilliantly confessional and inspiring records. To celebrate its fifteenth anniversary Sam will be playing Mercy in it’s entirety, as well as selections from his other highly praised albums.

He’s been described as “Maybe the most captivating songwriter in America” – Lone Star Music, and “Simultaneously beautiful and broken… Sam Baker is an artist worth waiting for” – NPR All Things Considered.

With a heart as big as his native state, and a sense of humour to match, Sam’s shows leave their audience with the feeling that the world can be a better place.