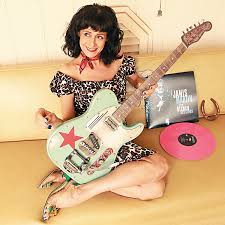 With her new record, A Simple Case Of The Blues, Rosie Flores returns to her roots as a seasoned performer steeped in life’s uncompromising lessons, “I got infatuated with the blues in high school. It was the first music I ever played,” she says.

Lending her soulful voice and fiery guitar to songs by Roy Brown, Wilson Pickett, Heath Wilson, and a spate of new originals, the album, co-produced by Charlie Sexton, features Flores on vocals, trading guitar solos with guitarist Kenny Vaughn (Marty Stuart, Lucinda Williams). “This is the music you make when you’ve come through joy and heartbreak and back again,” she says.

Over the course of four decades, she’s lent her exceptional talents to genres ranging from punk to alt-country, rockabilly and beyond. Along the way she’s made history as the first Latino woman to chart in Country music, won a Peabody Award, has been profiled in Guitar World,Premiere Guitar and Guitar Player magazines, and is ranked among the top female guitarists of all time.

American roots music gets no better than this.