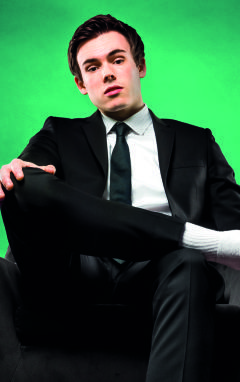 Rhys James is a sickeningly talented young stand-up. He’s a super-sharp writer, with a ton of smart, intricately-written jokes and stories where you’re never more than a few seconds away from another punchline.

Rhys has appeared on numerous TV and radio shows including BBC2’s Mock The Week, Comedy Central’s Russell Howard’s Stand Up Central, Sky’s Bring The Noise and Radio 4’s Fresh From The Fringe. He makes a big impact wherever he plays and he is certainly “destined for great things” (The Guardian). An accomplished comedian who possesses a great way with language who just has to be savoured for the quality of the writing alone.

“Rhys is well known for being the funniest man on Twitter, but that sells short the fact that he is a frighteningly good standup comedian, at a frighteningly young age. I think he could be really huge.” The Guardian