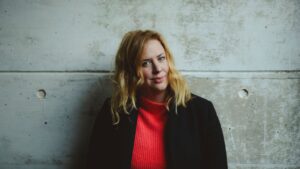 as one of the brightest and boldest jazz talents in the UK, she is just beginning to garner international recognition for her wide-ranging music which draws on influences from electronica, rock, drum and bass, soul-jazz, and singer-songwriters to create a distinctive personal sound full of artistry and heart.

For tonight’s gig, Rebecca has put together a new line-up, the members of whom are all pace setters on their instruments and also distinguished band leaders. Saxophonist Sam Crockatt has played in venues all over the UK including Ronnie Scott’s, The Albert Hall, the Jazz Cafe, and the Sage Centre. His debut album Howeird features pianist Gwilym Simcock, who has gone on to fame with Pat Metheny. The album won the Parliamentary Jazz Award for Best CD. Sam has subsequently signed to the prestigious Whirlwind label for his most recent recording Mells Bells. Bassist Henrik Jensen is originally from Denmark and has played at the club quite a few times now, both as leader of his own group Followed By Thirteen and with several other bands. Drummer Dave Smith is best known for his work with Robert Plant and the Sensational Space Shifters, Fofoulah, and Afro-Blues group Juju. He has recorded drums for Rachid Taha, Bassekou Kouyate and Robert Plant and has performed with Patty Griffin, Donny McCaslin, Chrisse Hynde and Eddie Henderson