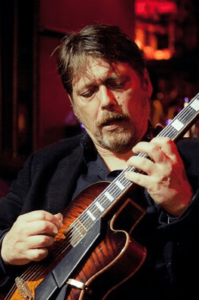 acknowledged as one of the hardest working musicians in the business. Musically, his blend of flowing bebop lines, deep blues sensibility and his mastery of chording continue to delight audiences and fellow musicians alike. His career highlights include a support show for Gladys Knight at The Royal Albert Hall and an appearance on Van Morrison’s recent album Keep Me Singing.

He has recently released a new CD “Wes Reimagined” to great acclaim, with 4-star reviews in BBC Music Magazine, Jazzwise and many more. The album features the trio plus guest saxophonists and strings, you can have a listen and even purchase it on Bandcamp.

Nigel is joined by one of the UK’s finest pianists and organists Ross Stanley plus the awesome drumming of Joel Barford.

At time of writing Nigel is waiting to hear if he is to receive Arts Council funding, if successful the band will be expanded to a quartet with saxophonist Vasilis Xenopoulos.