Midnight Skyracer are the UK’s bluegrass supergroup par excellence. During the course of their short history their electrifying performances at major festivals such as Cambridge and Cropredy have earned them accolades such as “Probably the best bluegrass I have heard from a non-American band.” fRoots and “This is a band that can go toe to toe with anything on offer from bluegrass’s spiritual home on the other side of the Atlantic.” **** RnR Magazine. 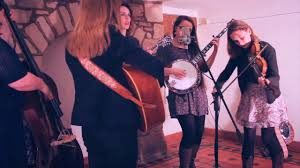 With an all star line up array of talents including Leanne Thorose’s powerhouse vocals and driving mandolin, Tabitha Agnew’s sweet voice and virtuosic banjo playing, Eleanor Wilkie’s rock solid bass grooves, Laura Carrivick’s flair, being equally adept on both fiddle and dobro and twin sister Charlotte’s agility on the guitar, with both sisters filling in the vocal harmonies, Midnight Skyracer are setting the folk world on fire.