Matt Hopkins – guitar. Matt’s inventive and melodic guitar playing has been featured in groups as 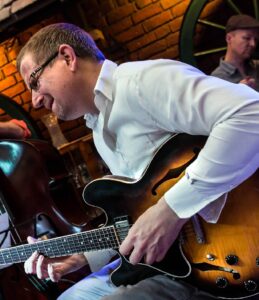 stylistically diverse as Andy Sheppard’s Hotel Bristol, Emily Wright & The Royals and the Hopkins-Hammond Trio. He also takes the lead role in the “Music of Pat Metheny” project alongside pianist Dave Newton. Matt is also known as an instructor and educator, specialising in jazz improvisation.

Bassist Henrik Jensen moved from Denmark to London in 1997 and is a graduate of the Royal Academy. He has toured the world from Tokyo to Moscow with various modern jazz projects. And also as part of the band for close harmony group The Puppini Sisters. Henrik leads his own quartet Followed By Thirteen and has also previously appeared at the club with Steve Banks Quintet and Double Standards.

Appearing on drums tonight Andy Hague is also well known as a trumpeter and is the organiser of the Be-Bop Club. As a drummer, he has backed many of the UK’s biggest jazz names including Don Weller, Peter King, Gerard Presencer, Andy Sheppard and many more.