Laugh, marvel and cry at the best comedian you’ve probably never heard of. The completely spell-binding Markus Birdman is a master of comic timing and isn’t afraid to push what society deems appropriate. 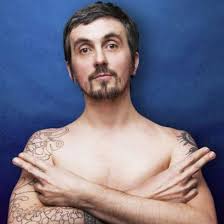 He is one of British comedy’s most experienced and well-travelled performers. In demand all over the UK and abroad, Markus is a veteran of the Edinburgh Fringe with many solo shows to his credit and headliner status at all the top clubs. He’s performed at the Melbourne, Adelaide, and Perth Comedy Festivals and was nominated by the New Zealand Comedy Guild for Best International Guest.

His international gig list would give Michael Palin a run for his money, with shows in Singapore, The Netherlands, Qatar, Bahrain, Austria, Spain, France, Norway, Sweden, Singapore, Switzerland, Finland, Cyprus and India to name a few. Not to be missed, catch him before he jets off again.

“Engagingly mixes the silly and the downright wrong.” Chortle