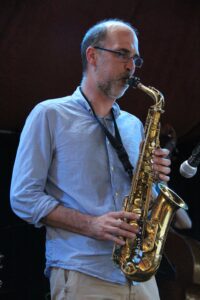 the John Wilson Orchestra, playing in a quartet with the great guitarist Dave Cliff for a number of years, and improv-based projects such as his quartet Moonscape, with trumpet player Jim Howard. Luke is as at home playing from the ‘Great American Songbook’ as he is playing free improv (which he puts to use in his other career as a music therapist). He has a lyrical style as an improviser and composer. Since arriving in Bristol in 2021 he has been forming new musical collaborations here in both straight-ahead and free improv contexts while also being heard back in London (his original home) in venues such as The Vortex, Ronnie Scott’s and Dean St Pizza Express, and in recording sessions (recently at Abbey Road recording alongside US drum superstar Pete Erskine).

Pianist Dan Moore is a musician based in Bristol, playing electric/acoustic piano, synthesizers and Hammond organ in a wide range of contexts. He developed his approach while studying contemporary music and performance at Dartington College of Arts. Since then, he has been in demand as a versatile musician, working with a wide range of artists such as Percy Sledge, Anna Calvi, Adrian Utley, Pee Wee Ellis, Fred Wesley, Will Young, Marc Ford, Beth Orton, Tom Jones, Massive Attack, Roni Size, Krust, and Tony Allen and Run Logan Run. Dan played organ in the Pushy Doctors alongside saxophonist Andy Sheppard and drummer Tony Orrell before Andy emigrated to Portugal.

Bassist Riaan Vosloo is well-known as a performer, composer, producer and educator. He has composed music for TV and films and has production credits on albums by Jamie Cullum and Gregory Porter. He is currently course leader for the MA in Popular Music Practice at BIMM Bristol and has previously taught at Birmingham Conservatoire.

Andy Hague is well known both as a drummer and trumpeter and has been the drummer for the Dave Jones Quartet for several years, performing at venues such as Pizza Express Soho.