A welcome return for this superb band who smashed it out of the park with a sell-out show on their last visit back in March.

Please note that this performance will be upstairs in the larger Studio room. 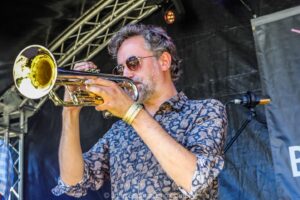 Jonny Bruce is a superb trumpeter, based in Bristol but with a national reputation. He is fluent in the whole history of jazz trumpet as he demonstrated some years back in his Trumpet Kings project, in which he covered pieces from Louis Armstrong through to Freddie Hubbard. You may have seen him playing around Bristol with bands such as Brass Junkies, Moscow Drug Club and the Dockside Latin Orchestra. He also played lead trumpet in a Harry James style with the Bruce/Illett Big Band, which headlined the Bristol Jazz and Blues Festival for several years running. Jonny was also featured prominently in the soundtrack to the recent BBC drama The Outlaws, which was filmed around Bristol.

For this new Hammond organ-based line-up Jonny has put together a more hard-bop and Blue Note style set, including tunes from Horace Silver, Roy Hargrove and Stan Getz.

Joining Jonny in the front line is tenor saxophonist Greg Sterland, who has played at the club several times before both as a band leader and as part of the Electric Miles tributes we put on as Christmas Specials. He cites a wide range of influences including Lester Young, Lars Gullin, Warne Marsh and Joe Lovano.

Organist Guy Shotton is a Cardiff Uni music graduate possibly better known across the bridge but now living in Bristol. Guy is sometimes to be found working with saxophonist Jeremy Huggett’s mainstream band and also works a lot with up-and-coming vocalist Sarah Meek in her Sheek quartet. He has been an Assistant Musical Director for Bristol Hippodrome Choir and has backed visiting jazz artists such as Alan Barnes, Simon Spillett, Dick Pearce and Chris Biscoe.

For this gig the drummer is Matt Brown, covering for regular incumbent Alex Goodyear who is away on tour. Matt is hailed as one of the most dynamic and innovative drummers on the UK scene, you can hear him playing with Run Logan Run, Dakhla Brass and Orphic. He has also subbed for Radiohead’s Clive Deamer in Get The Blessing.