Saxophonist Joe Northwood is becoming one of the Cardiff jazz scene’s major voices, and besides 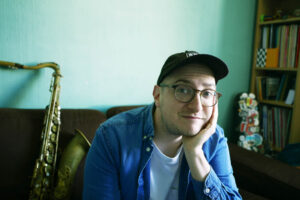 playing also promotes gigs and jam sessions at Tiny Rebel. Having graduated from the Royal Welsh College, Joe furthered his studies by attending some of the USA led summer schools in Italy, where he received tuition from some of the world’s greatest such as Walter Smith iii, Ben Wendel and David Binney.

Impressions: A Coltrane Celebration is Joe’s new project motivated by his love for the music of saxophonist John Coltrane. Joe’s first ever jazz purchase was ‘Coltrane’s Sound’. An astonishing album with Coltrane’s definitive rendition of ‘Body and Soul’ and ‘standards’ such as Equinox and Central Park West, this recording has always inspired Joe and helped shape his sound throughout his career, and it seemed about time to honour the formidable legacy of this saxophone behemoth.

Tom Berge is a jazz pianist and music teacher based in Bath, with a 1st Class Honours (BA) in Jazz Piano (Leeds College of Music) and an MA in Composition for Film and TV (Bristol University). He plays regularly with his own trio across the UK and has tutored at the Yamaha Jazz School in Falmouth and at the Dordogne Jazz Summer School.

Aidan Thorne is one of the leading bassists and composers in South Wales, well known for work with his own group Duski.

Drummer Jon Clark is a versatile musician appearing in groups of many styles, and is becoming something of a star in the local Latin and salsa scene. He last appeared at the club with the Jim Blomfield/Michel Padron Quintet.