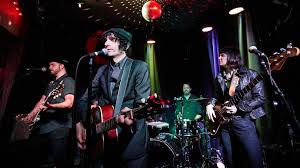 from £16
Buy Tickets
All Events

Jesse Malin is a New York based musician who first rose to fame with the influential punk band D Generation, and has since embarked on an acclaimed solo career, bashing out albums and earnest concerts on a regular basis.

A prolific writer and relentless road warrior, Jesse Malin continues to circle the globe with his band and produce critically acclaimed studio albums.