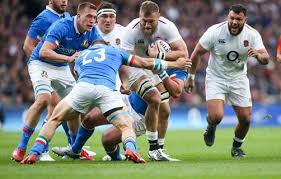 Italy will take on England at the Stadio Olimpico in Rome on Saturday 14th March. This will be the second of three matches taking place on the final day of the 2020 Six Nations Championship.

England scored eight tries as they hammered the Azzurri 57-14 during the 2019 Championship. More recently, England beat Italy 37-0 during the World Cup warm-ups.

Italy and England have contested a total of 26 rugby test matches since their first meeting in 1991. England maintain a 100% record having won every match.