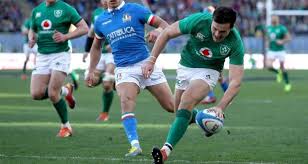 Ireland will take on Italy at the Aviva Stadium in Dublin on Saturday 7th March, during the penultimate round of the 2020 Six Nations Championship.

Ireland laboured to a 26-16 victory over the Azzurri during the 2019 Championship. More recently, Ireland beat Italy 29-10 during the World Cup warm-ups.

Ireland and Italy have contested a total of 31 rugby test matches since their first meeting in 1988. Ireland have won 27 of those matches, whilst Italy have won four matches.