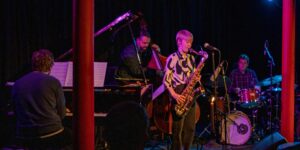 Scottish saxophonist Helena Kay greatly impressed on their previous visit to the club back in May, appearing as part of drummer Rod Oughton’s band Tomorrow’s New Quartet. Tonight returning as band leader, Kay’s original chordless KIM trio has been expanded to a quartet with pianist Peter Johnstone for the new CD release Golden Sands.

Made up entirely of original compositions, many of which were composed whilst studying in New York, Golden Sands brings together the lush harmony and contemporary grooves of British jazz with the attitude, grit and tradition of the American sound. 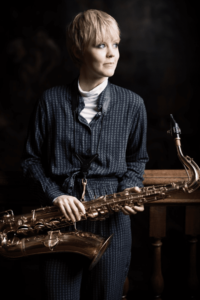 Originally from Perth, Helena Kay moved to London in 2012 to study at the Guildhall School of Music and Drama, graduating in 2016 with a First Class in BMus Jazz (Hons), having also been awarded the Young Scottish Jazz Musician of the Year Award in 2015. Kay released debut album Moon Palace in 2017 after winning the Peter Whittingham Jazz Award the same year. The album was recorded with their band Helena Kay’s KIM trio, released on Ubuntu Music in December 2018. The album features David Ingamells on drums and Ferg Ireland on double bass.

Pianist Peter Johnstone is a tutor at the Royal Conservatoire of Scotland and is a member of internationally renowned Scottish saxophonist Tommy Smith’s quartet.

Calum Gourlay has become one of the UK’s best-known bassists, dividing his time between London and Scotland. He runs his own big band and quartet and is well known for his work with Tommy Smith, Kit Downes and Ivo Neame. He appears on SW sax star Josh Arcoleo’s debut album Beginnings.

Drummer David Ingamells is based in London and performs regularly at all the major jazz venues in the UK. He has also performed abroad in Denmark, Ireland, and Spain. He is the drummer for Kate Williams’ Four Plus Three, Helena Kay’s KIM Trio, and the London City Big Band.