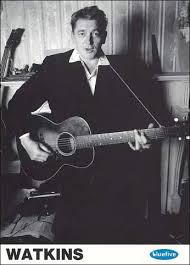 For so many years a keystone of the bands of Nick Lowe, Van Morrison, Bill Wyman’s Rhythm Kings, Dave Edmunds and countless more, Geraint Watkins is also a revered creator of his own sublime music.

Attempting to designate a musical category for Watkins is not without its challenges, but the perspicacious Nick Lowe once observed that he could be filed as “the missing link between Paulo Conte and Howling Wolf”. Another beacon of taste – Bob Dylan – proclaimed himself a fan by playing two solo cuts on his Theme Time Radio Hour saying (without a hint of irony) that “Geraint Watkins is my favourite English piano player.”

In 2017, Geraint returned to the idea of recording his own material having found a new and unlikely collaborator in the form of Simon Ratcliffe of The Basement Jaxx to push his boundaries even further. This unique aggregation – aided by some master musicians has produced what will surely come to be regarded as the finest yet of Geraint’s solo projects.

Watkins and his band make a rare appearance promoting the new album “Rush Of Blood”.