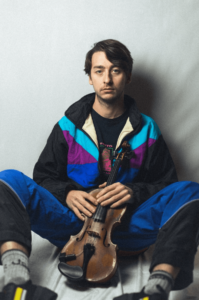 semi-finalist Dominic Ingham has toured extensively across the UK with his quintet at venues/festivals such as Ronnie Scott’s, Love Supreme, Barbican and EFG London Jazz Festival. He is an accomplished and well-rounded musician, a powerful communicator and performer, a composer of captivating original music and a pioneering violinist. In 2020, Dominic released his debut album ‘Role Models’ to critical acclaim. This self-released record features an arresting suite of lucidly crafted and characterful pieces and showcases Dominic’s distinctive and highly personalised style, rooted in his background of folk and classical music.
Dominic and his quintet are set to produce a sound that is as lyrically fresh as it is striking dynamically and rhythmically.

“Ingham’s music propels him into the ranks, writing an exciting chapter in contemporary UK jazz history” – All About Jazz