Pianist Dave Jones was based in Cambridge for many years but has now returned to South Wales. His diverse career has included studio work preparing old analogue recordings for reissue on CD, teaching Music Technology and jazz at degree level and writing articles and reviews for Jazz Journal magazine. 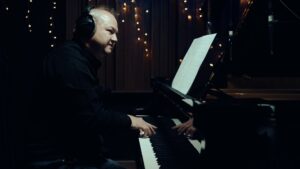 He is also a film & tv composer and has had his tracks used in the omnipresent US comedy hit The Big Bang Theory. Dave last appeared at the club in July 2021 with his quartet featuring Ben Waghorn on sax, but tonight presents a new line-up to perform material from his recent CD release Unfinished Sentences.

Unfinished Sentences is a collection of previously unreleased tracks recorded in London in the late 1990s. “One of the most pleasant discoveries to be had in hearing these unearthed tapes is that not only do they capture Jones in bursting, cork-out-of-the-bottle form, they also find room for other musicians who were then mainstays of the British jazz ‘circuit’.

Some of them are familiar (the late percussion maestro Robin Jones, the legendary session bassist Herbie Flowers), others are known mainly only to other players, like the lyrical blind trumpeter/flugel-hornist Nick Hill, whose Chet Baker-ish playing here might confuse a Blindfold Test victim (Lone Star), or the late bassist Mike Harris, who, as they say, ‘played with them all’ and, as his showing here proves, did so very deservedly.” (Simon Spillett, 2021 – from the liner notes).

Dave has recently been booked for performances in London’s Pizza Express Soho and Karamel jazz clubs.

Have a listen here
https://www.davejonesjazz.com/