Guitarist Dan Waldman is well known both in Bristol and London, where he has presented his own band at Ronnie Scott’s. He spent several years living in New York and has returned to the USA several times. In 2020 he released Sources and Angles, his debut recording as leader, recorded in Brooklyn and featuring international saxophone star (and former Bristol University student) Will Vinson.

It was Dan’s suggestion to assemble tonight’s line-up for the club’s Christmas special, with the intention of playing classic tunes from the likes of Joe Henderson and Lee Morgan.

Trumpeter Andy Hague leads his own quintet and quartet project Double Standards alongside tutoring for Bristol Jazz Workshops. He also books the bands for the Be-Bop Club.

Keyboardist Jonny Henderson [playing organ tonight] appears infrequently at the club since he is incredibly busy performing in the blues scene, and pre-pandemic was frequently off on tour. He has a long association with guitarist Matt Schofield, and was voted Keyboard Player of the Year in the British Blues Awards 2010 and 2011. He also appears on albums by Ian Siegal, Eddie Martin and the Starlite Campbell Band. Suffice to say he is also an excellent jazz player.

Drummer Mark Whitlam has recently been playing with saxophonist Iain Ballamy as well as co-leading his jazz/nu-soul project We Are Leif. He is the senior drum tutor at Bristol’s BIMM music college. 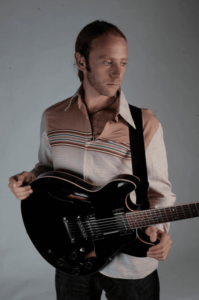