Damon Brown is one of the UK’s top jazz trumpeters, who released his debut album A Rhythm 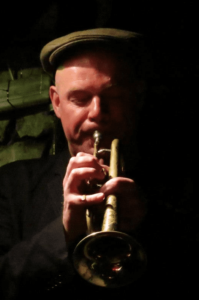 Indicative back in 1998 to great acclaim. He went on to work alongside most of the UK’s best-known players such as Peter King and Don Weller and began to forge international links with players from Europe, Japan and the USA. He co-led the band Killer Shrimp with saxophonist Ed Jones, winning the 2007 Best Live Jazz Group at the All Party Parliamentary Jazz Awards. Their first CD, Sincerely Whatever,  was nominated for Best Jazz CD of the Year. In 2008 he recorded the CD This Time The Dream’s On Me with legendary ex-Miles Davis saxophonist Steve Grossman. For the past decade or so Damon has mostly been based in South Korea, where he continues to work with many visiting and ex-pat USA musicians. Don’t miss this brief tour back in the homeland.

Swiss saxophonist Martin Kern made a great impression with the Be-Bop Club audience when he first performed for us back in July. He studied in Paris at the Cèntre d´’Information Musicale and at the Swiss Jazz School in Bern before spending some time in New York. He then moved to Berlin where he became a part of the vibrant jazz scene. It was there that he recorded his first albums as a bandleader, “Visions” and “Now Is The Music”. Martin’s music is a striking blend of bebop, hard bop and contemporary jazz, his sound-reflecting those of legendary saxophonists Sonny Rollins, Dexter Gordon and others. He has been living here for a couple of years to complete an MA in Film & TV Composition at the University of Bristol.

It’s the first time at the club since we moved for pianist Andy Nowak who has recorded two great CDs with his trio ANT, and the band is completed by Riaan Vosloo – double bass and Andy Hague – drums.

The pairing of these two powerful front-line players should get a few sparks flying.