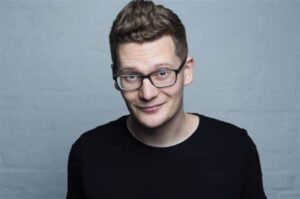 Our first Circuit Breakers show sold out last month with people being turned away at the door. The Chicken Shed venue at the Hen & Chicken is perfect for a showcase event of this nature. Resolutely intimate and electrifying in equal measure!
This month’s headliner is the fantastic Robin Morgan who is a regular guest on Ellie Taylor’s Safe Space on BBC Radio 4.

“Bloody funny. Well-written, hard-working stand-up from a massively likeable performer who must be on the verge of nationwide fame.” Chortle

And introducing Priya Hall (as seen on BBC’s Stand Up For Live Comedy and Live From Aberystwyth Pier), Firuz Ozari (Winner of the 2022 Leicester Mercury Comedian of the Year), and newcomer Millie Haswell. Host is the very capable and engaging Calum McCarthy.