Super excited about this one – we put on a fair few national touring bands, but it’s only once in a while that the planets come into alignment and we’re able to present an international tour such as this fantastic band from the USA.

Charged Particles are a trio from the San Francisco Bay area, and have been together with their current line-up for around a decade. “Charged Particles dazzle” – Downbeat Magazine. Alongside their trio performances, the band also like to collaborate with guest artists and have previously worked with saxophonist Paul McCandless [Oregon].

For this latest venture, they have teamed up with saxophonist Tod Dickow to play the compositions of Michael Brecker, one of the most influential saxophonists of all time who sadly passed away in 2007.  The current tour is to promote new CD “Live At The Baked Potato.” 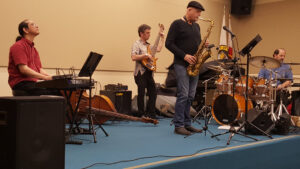 Taking on the legacy of such a major figure is of course a pretty daunting task, but the album has received rave reviews for its high energy performances and for reminding us that Michael Brecker was a great composer alongside his incredible playing.

As Michael’s elder brother trumpeter Randy Brecker says: “Veteran Bay Area trio Charged Particles, with Tod Dickow mightily added on tenor saxophone, present eight Michael Brecker originals, and one from Don Grolnick. Smoking and intense from beginning to end, they’ve all internalized Mike and his music to an impressive degree of accuracy and moreover: feeling! I found myself pinching my arm to remind myself that Mike is sadly no longer with us. You find yourself jumping into Mike’s mindset listening to this CD, and transported to another time. Take the journey and check out this live recording. Everyone is at the top of their Mike game!”

Tod Dickow has performed at many major venues and events such as The Monterey Jazz Festival, The Kool Jazz Festival, Yoshi’s and SFjazz while backing many well-known artists such as Dave Brubeck, Ella Fitzgerald, Nancy Wilson, Frank Sinatra Jr., and more.

Murray Low is well known both as a jazz and Latin pianist, having been nominated as 2008 Pianist of the Year by the Latin Jazz Corner and for a Grammy in 2004 as part of Machete Ensemble. His career has included both local and international performances with Bob Mintzer, Clark Terry, Benny Golson, John Patitucci, George Duke, Bob Sheppard, and John Handy.

Bassist Aaron Germain has lived in the Bay Area since 2000 and has worked with Yusef Lateef, Stanley Jordan, Scott Hamilton, Nguyen Lee and many more.

Drummer Jon Krosnick has worked with a huge range of bands and musicians, but most notably must surely have been playing in a trio with Chick Corea and John Patitucci in 2012.