The Thom Dalby Quartet joins The Be-Bop Club for the first time this September.

Thom Dalby is a terrific new trumpeter on the scene. As a graduate of the Royal Welsh College, he’s often 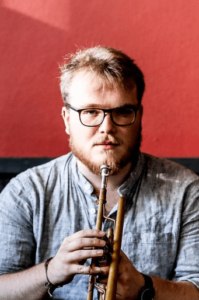 to be found playing over in Cardiff, but is now based in Bristol and turning a few heads. You might have previously heard him with Jack Mac’s funk band at the Old Duke.

Also a first time at the club for pianist and organist Guy Shotton – a Cardiff Uni music graduate possibly better known across the bridge but now living in Bristol. Guy is an extremely versatile player who can cover any style. He is often found working with saxophonist Jeremy Huggett’s mainstream band and up and coming vocalist Sarah Meek in her Sheek quartet. He has also been an Assistant Musical Director for Bristol Hippodrome Choir. Guy has backed visiting jazz artists such as Alan Barnes, Simon Spillett, Dick Pearce and Chris Biscoe.

Greg Sterland has played at the club several times, both as a bandleader and as part of the Electric Miles tributes we put on as Christmas Specials. He cites a wide range of influences including such as Lester Young, Lars Gullin, Warne Marsh and Joe Lovano.

Andy Hague has played the drums with many visiting artists such as Peter King, Gerard Presencer, Don Weller and Don Rendell, and is currently ​a regular member of the Dave Jones Quartet.

Bristol seems to have an ever-expanding population of quality players, so some of our forthcoming gigs are going to be labelled BBC Introducing [BBC obviously standing for Be-Bop Club], in which we’ll be highlighting players who haven’t performed at the club before.